BALSA is back in action! Janet Trares has taken over on drums and their first time out with the new lineup will be at Lucky Liquor, along with the punk destruction of RAPTOR TRACTOR and sublime noise of POWER SKELETON. 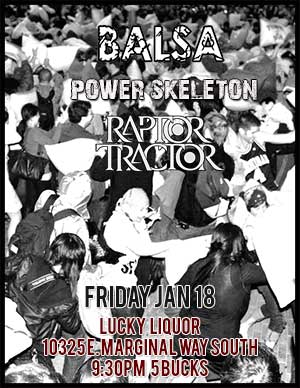 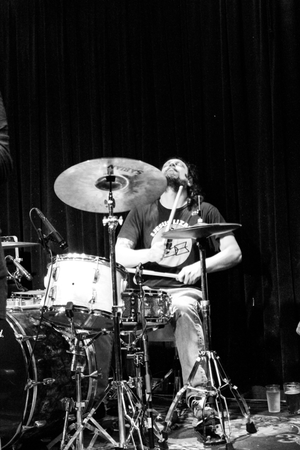 We are deeply saddened to share the loss of Balsa's drummer, Michael Mehigan, who passed away suddenly and unexpectedly. He had been with the band for six years, they played many shows and made incredible music together. Mike leaves behind his wife Kristen and two daughters, as well as friends and extended family. Our thoughts are with them all.

A GoFundMe campaign is underway to help his family with the challenges ahead. You can contribute or learn more here:
https://www.gofundme.com/mike-mehigan-memorial-fund.

BLOWBACK IN THE STUDIO 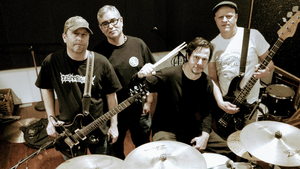 This! BLOWBACK just went into the studio in upstate New York with the legendary Don Fury (Agnostic Front, Sick of it All, CIV, Quicksand, etc.) to record some new songs. A release is on the way, more details to come! 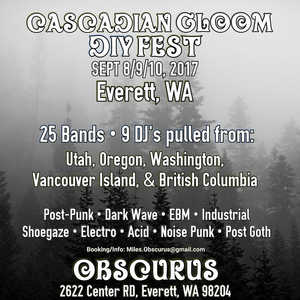 Balsa will be playing Sunday Sept 10 at Day 3 of the Cascadian Gloom DIY Fest! There will be over 25 Bands and 9 DJs from Utah, Oregon, Washington & Vancouver/BC playing post punk, noise, electro, darkwave, psychgaze, synth punk, industrial, that's just scratching the surface but you get the idea, an amazing range of artists. Full details below. CASCADIAN GLOOM FEST 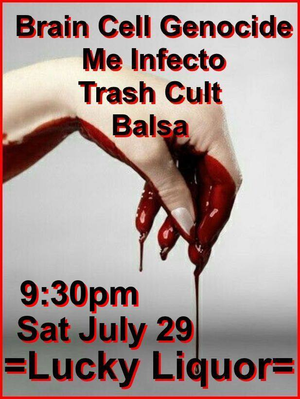 It's a killer lineup at Lucky Liquor on a Saturday night with hardcore, noise, punk and all that. What more could you want?

BALSA will open things up so get there early, then stay for TRASH CULT, the revived noise duo ME INFECTO and the hardcore thrash of BRAIN CELL GENOCIDE!

PINK MUSCLES & TODAY IS THE DAY at The Highline 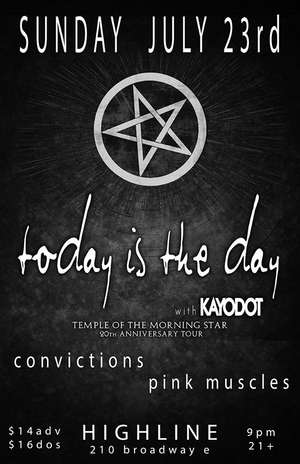 PINK MUSCLES opens up for the legendary TODAY IS THE DAY, along with KAYODOT and CONVICTIONS tonight at The Highline!

Be sure to show up early and check out the debut release THE SIGNAL from Pink Muscles! 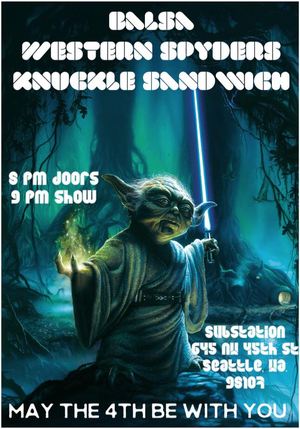 Yes, May the 4th be with you! BALSA is back, and this Thursday at Substation they'll be playing a brand new set of songs for the first time including "Burn the Ships", "The Epidemic", "Too Big to Fail" and many more.

Balsa will be joined by WESTERN SPYDERS bringing the rawk from Tacoma and KNUCKLE SANDWICH from Auburn ready to crush - don't miss it!

PINK MUSCLES: THE SIGNAL ARRIVES MAY 1 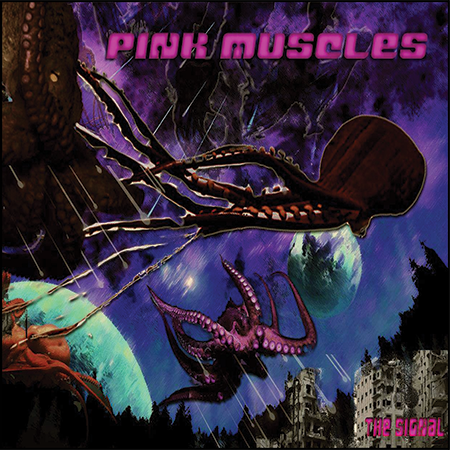 It's a Sci-fi Noise Attack! The angular punk of the debut release from Seattle's PINK MUSCLES melds a punishing mix of aggressive music styles with gory science fiction themes to create the soundtrack for one of the most disturbing horror films youve never seen.

Called "a rallying cry for a too-stale punk scene" by The Stranger, PINK MUSCLES has been already been heard on KISW, KEXP and KUSF.

Here's the full track list - you can preview it now on Bandcamp.

PINK MUSCLES ON THE RADIO 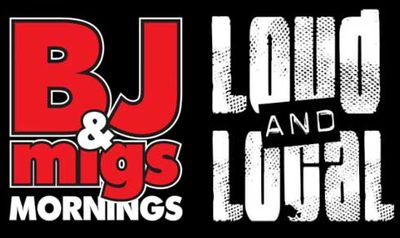 PINK MUSCLES are about to release thier debut "The Signal" on May 1, and KISW and KEXP have already given their support including making PINK MUSCLES the Loud and Local band of the week on KISW! Hear it for yourself here. 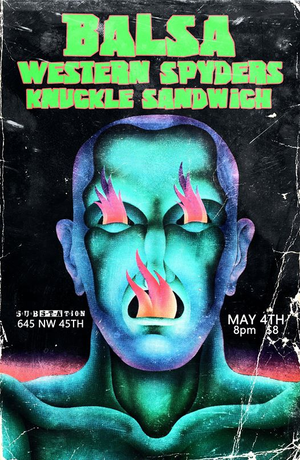 That's right! After a break to get new songs ready for your unsuspecting ears, Balsa returns on May 4 at Substation where they'll play a bunch of new tunes for the very first time. Don't miss it! 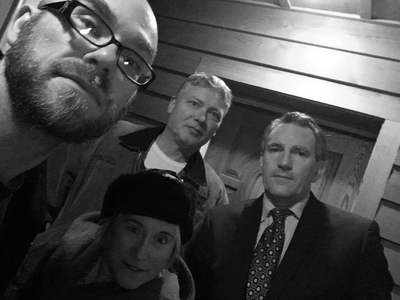 The debut release from Seattle's PINK MUSCLES, The Signal, drops on May 1! You can preview it HERE and get ready for their tour in June - dates below.

PINK MUSCLES: THE SIGNAL IS COMING

The Signal is coming. You have been warned. Stay tuned for further transmissions. 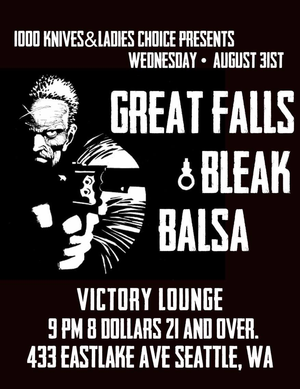 Seattle hardcore legends Great Falls, Syracuse NY next big thing Bleak, and our own noisemongers Balsa are going to torch the Victory Lounge on Aug 31. 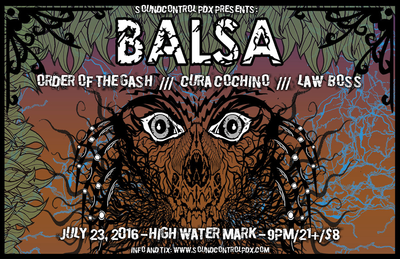 Balsa is coming back to Portland this Saturday, for the first time in over 2 years. Playing with the almighty Order of the Gash, Cura Cochino from Sacramento and PDX's own Law Boss. 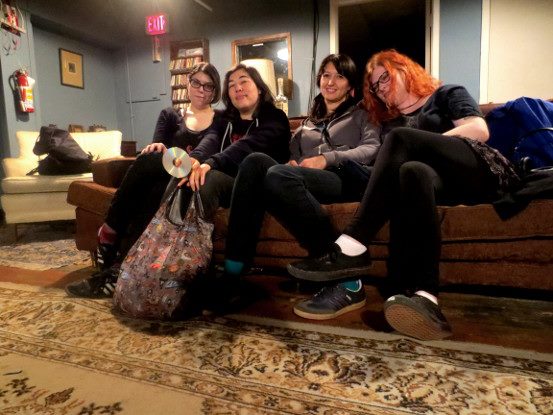 With a heavy heart we share the loss of Amelia Cawlins, the vocalist of Sei Hexe. She was a unique, unmatched voice and dear person who brought power and fury to the music of Sei Hexe.

A memorial show is happening April 24 to celebrate her life and benefit the Feral Cat Coalition of Oregon.

Take a listen to the music of Sei Hexe
and reach out to contact the band on Facebook. 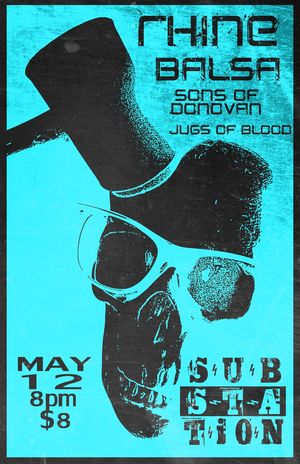 This show is going to kill! Balsa comes to the Substation in Ballard for a night of bludgeoning of every sort. With Rhine, Sons of Donavan and Jugs of Blood.

Get your DCHC fix with a two-track blast from BLOWBACK! In this episode, they take on oil fracking ("Water on Fire") and mass media ("Faux News"). Guess what's in your water!

BALSA AT THE MIX

Balsa returns to Georgetown at The Mix! This is the site of their first show ever, so will be a fun evening. Playing with The Sun Giants (groove-heavy stone rock), Killer Shades (tight post-hardcore), and Postmartym.

NEW BLOWBACK ON THE WAY

BLOWBACK is finishing off some new tunes, check here for updates soon!

Scene Point Blank weighs in on the Balsa/Sei Hexe split - they give the nod to Sei Hexe! Read the review here.

Balsa returns with a great rawk lineup at the Victory Lounge. They will be playing some new songs - don't miss it!

It's the perfect lineup! BALSA and SEI HEXE are teaming up for a show to celebrate the release of their split on String Break. This will be in Portland (Sei Hexe's home base), rumor is there may be a Seattle date to follow.

Thanks Profane Existence for the great review!

Coming soon! A new release with Seattle noise rockers BALSA and the harsh brutality of Portland's SEI HEXE - here is your first look at the killer art by Sean Schock! 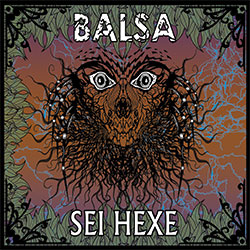 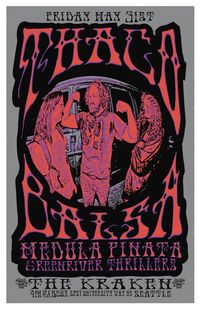 BALSA is back in action with a show this month in Seattle in advance of their upcoming release! Not to spill too much but it will be a split with one of Portland's best. Stay tuned, and catch them at The Kraken. 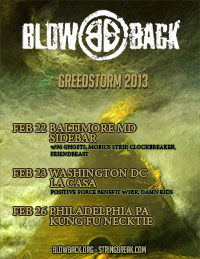 BLOWBACK returns to the east for shows with Mobius Strip, Damn Kids and more! Don't miss it.

Get all the info on BLOWBACK.ORG
BLOWBACK REVIEW ON RAZORCAKE

Thanks Razorcake for the great review of Greed Runs The Clock:

"Well-executed punk/hardcore that bounces from one tempo to the next and to the next in complex shifts while a singer makes astute observations about the state of American culture....Varied enough over four tracks to sound fresh throughout, with quite a scratchy guitar sound that provides edginess to the proceedings. 'Cassandra's Lament' is the standout track with spoken word elements that are like a less manic Jello Biafra.... Kudos and backslaps all around; good, good stuff."

You can read the full review on Razorcake. 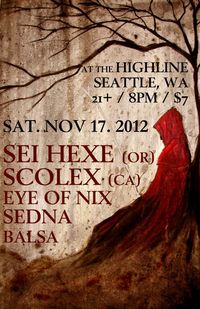 Seattle heads be sure to catch BALSA on one of their upcoming shows - and look for new music soon, recorded with TAD at Witch Ape Studios!

BLOWBACK is playing a few shows next weekend to give Greed Runs The Clock a proper thrashing.

Get all the info on BLOWBACK.org

SHALL I BE FRANK? ON FOX SPORTS

"We Are Liverpool", the stomping stadium anthem from Shall I Be Frank?, is now featured on the FOX Sports documentary 'Being Liverpool'. You can check out the episodes on Fox Soccer Sundays at 9pm.


Get the WE ARE LIVERPOOL MP3 right here!

"BLOWBACK.........holy hell!!!!!!! What a release! This has to be one of the best releases of the year, one that will get played to death and makes me want more than just the four songs on here... I couldn't recommend this more."

Get GREED RUNS THE CLOCK here!